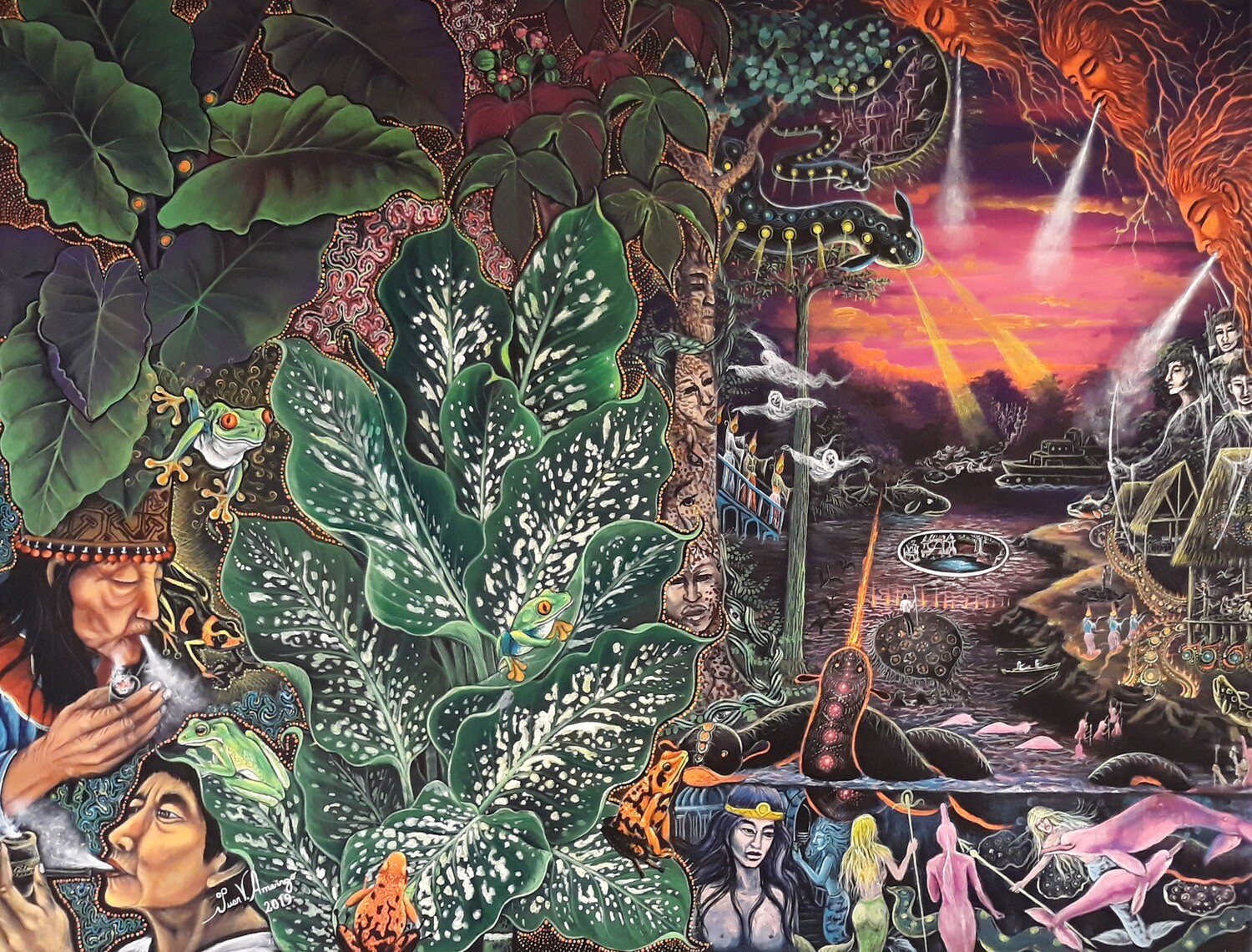 In this Visionary work of contemplation we see the so-called "Trueno Madrecita" (Thunder of the mother vine, that teaches us to take care of the mundo vegetal (the vegetation), respecting it lovingly. It also teaches us to take care of our own body, our clothes and belongings, our speech, our mind and our heart.It also symbolizes the thunder and lightning and strong rain storms.

At the upper right side of this work we see three elders called "Papa-Truenos" (Papa-thunder) with very long hair and beards that represent the lightning and the “Trueno Madrecita”. Their breath of spiritual energy symbolizes that soon a torrential rain will come.

Also at the upper-right side we see the so called "Huaira-Mamam", the spirit of the wind. The Huaira-Mama looks like a spiritual serpent, emanating strong electrical discharges from its mouth and from its eyes a hypnotic light.With this phenomenon it notifies all its opponents, whether human, animals, or beings that cause damage. It also penetrates with electromagnetism into any being, whether human, animal, trees or enchanted stones.

In the central part of this work we can observe some beings of white color called "Tunchis", that are wandering. A Tunchi is a mythological being well known in the jungle of the Peruvian Amazon. Many people believe that the Tunchi is the spirit of a dead person and that it transforms into a ghost. Some have seen it as people and others as ghostly beings. Others think that it is us humans that go out to wander before dying.

At the central right side we see the "Supai-Barco" (Barco fantasma, Ghost ship). It is called ghost ship because it is the transformation of a gigantic anaconda called "Acoron". These gigantic snakes are transformed into very large floating ships with so-called Bufeos-colorados (pink dolphins) as crew members. The passengers are the "Yacu-Runas", “the people that live in the depth of the water”, like sirenitas (mermaids), among other aquatic beings.

Left of the Supai-Barco we can observe another gigantic serpent called Yacu-Mamam, which means mother of the water.

Below it we observe a gigantic oval hole in the water which symbolizes the entrance door for the Yacu-Runas, the under water people.

Below this entrance we see a gigantic ray, called "Raya-Mamam" and standing on it we see a great master Shaman who has the degree (spiritual level) of a Sumi-Runa. The Sumi-Runas are master Shamans who dominate the water, earth and air.

In the lower central part of this work we can observe the "Anguila-Mamam " (head spirit of the eel) which emanates from its mouth a strong spiritual magnetic energy.

In the lower central part, below the water surface, we see the Yacu-Runas which are beings similar to people who live in the depths of rivers, lakes and enchanted places where there is water.

We also see the pink dolphin that is also known in the Peruvian Amazon as "Puca-Bufeo" (red dolphin). It has the property of transforming into a person of white complexion and blond hair, wiry eyes and a good stature. It is said to court single women when it finds them alone at home.

The tree in the center with the faces on the bark is the Catahua. The faces are the spiritual genies or mother of the tree.

In the upper-left part we see the master plants called Patiquinas of the black and white.

These plants and all the forests of the jungle seem to live in a world of silence, but it is not like that. The same biorhythm in its developments makes that some spiritual beings inhabit inside them, and so it happens with all of the plants, bushes, trees and lianas. Inside of these there are benevolent and also malevolent spirits. Curanderos only work with the head spirits of the medicinal plants.

On the left margin we can also observe two great Shaman masters receiving the teachings and energies of the plant called Patiquina.

This website uses cookies to improve your experience while you navigate through the website. Out of these, the cookies that are categorized as necessary are stored on your browser as they are essential for the working of basic functionalities of the website. We also use third-party cookies that help us analyze and understand how you use this website. These cookies will be stored in your browser only with your consent. You also have the option to opt-out of these cookies. But opting out of some of these cookies may affect your browsing experience.
Necessary Always Enabled
Necessary cookies are absolutely essential for the website to function properly. This category only includes cookies that ensures basic functionalities and security features of the website. These cookies do not store any personal information.
Non-necessary
Any cookies that may not be particularly necessary for the website to function and is used specifically to collect user personal data via analytics, ads, other embedded contents are termed as non-necessary cookies. It is mandatory to procure user consent prior to running these cookies on your website.
SAVE & ACCEPT